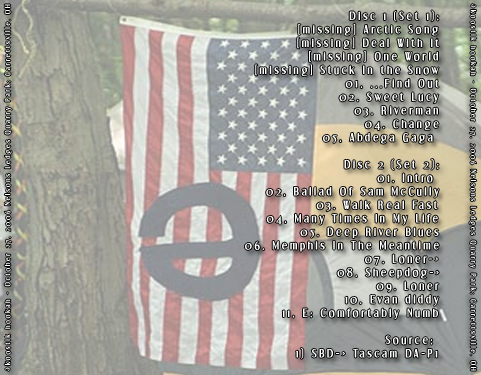 Reviewer: JadeTigerGuitar - favoritefavoritefavoritefavoritefavorite - March 5, 2020
Subject: Ekoostik Hookah channeled the energy of the sky
We watched the weather all weekend for this show. Maybe snow, maybe sun, was predicted for the week of the show. We rolled into the Meadows and set up camp when it started raining. Rain turned to sleet, but then let off. The whole place was buzzing with pre show adrenaline. We herd music through the trees, and my Hookah family headed to the beach. The first song of this set really reflects the mood of uncertainty. The clouds were moving extremely fast over the lake, and they were rolling and large with dark pockets. The band started into the set as the strongest fans stayed on the sand, huddled around fire barrels they set up for us. Everyone around felt a very strong sense of "Uh oh.." as it seemed the band dropped their energy into second gear, and floored it. We were watching the band as they were also watching the sky, as the wind picked up, and lightning struck the far end of the lake. At this time it seemed as there was a slight tornado formation towards the North, and the wind picked up tremendously. The band called it off, just when a huge snow flurry started. Everyone scrambled back to their safe places, and we waited the blizzard out. A few hours later, everyone in the area feeling so uneasy from the "effects", were relieved to hear music once again, and the band came back out and really laid down a nice, super tight set. Everyone felt so exasperated from experiencing almost every type of weather phenomenon over a period of four hours; the music was such a relief at the time. Those who were at this show know the meaning of true supporting fans, and what it means to be a Hookah Head, and the band, who seemed to have sensed the turbulent energy, came through and blasted everyone into a better state of consciousness. This show was very special in how so many people had to over come so much, to just stay together. Then it blizzarded into the morning. #gottaloveOhioweather
Cheers~
Stephen

Reviewer: Romulan42 - favoritefavoritefavorite - October 24, 2009
Subject: wow was it cold
It sure was a cold one , and by the second night it was literally a blizzard at the nelsons ledges. Luckily during the Gory at the Quarry shows they hold the chili cook off tournament. A guy named "Big Tony" hooked me and my friend up with a nice bowl or two of chili and a beer. I will never forget what a wild wild weekend this was... Hookah Is Worth Every Bit Of It ! Great Show //// Change /// one you don't hear often